Know the History of your Myford Lathe

This page provides a little background and a chronology for the Classic range of Myford Lathes.

The ML7 Lathe was launched in August 1946, the basic bench lathe retailing at £34.00. The ML7 was so successful that it saw the immediate demise of its predecessors the ML2 and ML4. The Myford 'M" type, a Myford version of the Drummond 'M" type, cost £42.00 and production of this was discontinued in 1949. Over its 33 years production run, the ML7 stood the test of time remarkably well. Whilst there were numerous minor changes, the number of major design changes were very few and these are listed below.

In July 1969, commencing with serial No. K90494, a cast lug was incorporated into the headstock. The lug is situated just behind the spindle nose and its initial purpose was to act as an anchor point for the optional lever operated collet attachment. In later years the same point would be used as a pivot point for the chuck guard.

In May 1972, from serial No. K107657, the existing carriage was converted from the narrow guide to the wide guide principle. On the earlier machines the saddle located across the front two shears and on later models across the full width of the bed, the 5/8" diameter leadscrew and die cast apron were retained.

From serial No. K108718, the cross slides were fitted with 5mm pitch self-locking adjusting screws.

April 1973 saw the introduction of the new bed from serial No. K111727. The re-design was necessary to accommodate the power cross feed apron on the Super 7 lathe. At the same time the specification of the ML7 was upgraded to incorporate the 3/4" diameter leadscrew and cast iron apron as used on the pre-power cross feed Super 7's.

It should be noted that long bed ML7 lathes were always fitted with 3/4" diameter leadscrews and the saddles, cross slides and top slides were the same as used on the pre-power cross feed Super 7 lathes.

The Super 7 Lathe was introduced in April 1953, to complement the already very successful ML7 lathe. Whilst virtually identical in capacity, the Super 7 incorporated a number of features within its standard specification that made it a truly outstanding machine.

A spindle, supported in a taper bronze front bearing and a pair of angular contact ball races at the rear, which for its size gives outstanding performance. This, coupled to 14 spindle speeds, gives an excellent and progressive speed range of 27-2105 rpm. Over 40 years later, there are many machines being marketed as screwcutting lathes, which have bottom speeds of 200 rpm or so. This is just too fast for screwcutting. Other features are backgear engagement by lever, a countershaft clutch unit, a larger cross slide with block type gibs, a fully swivelling top slide, re-settable friction dials on both cross and top slides, a self ejecting tailstock and a leadscrew handwheel. Over the years, there have been a great number of modifications made to the original design as part of our continual policy of planned improvement. The major additions and changes are as follows:

The first quick change gearbox became available in 1955. The gearbox used soft gears and the leadscrew drive was on the right-hand side of the gearbox. In 1956, hardened gears were fitted to the gearbox.

December 1956 - the gearbox design was completely revised and, from gearbox No. QC2501, the leadscrew passed through the gearbox and the drive was taken from the left-hand side.

June 1958 - from machine No. SK8128, the expanding sleeve clutch mechanism was changed to the current cone clutch. The change involved re-designed motor and headstock belt guards.

May 1959 - from machine No. SK9167, the drip feed lubrication to the headstock was replaced with a wick feed system.

February 1975 - from machine No. SK120965, swing head oilite bushes were ground on the outside diameter.

June 1975 - from machine No. SK 122657, the bronze cross slide feednut on power cross feed models was changed to hardened steel.

December 1975 - from machine No. SK126004, the power cross slide feedscrew was modified, requiring a larger counter bore in the corresponding micrometer dial.

November 1977 - from machine No. SK136311, the power cross feed apron was re-designed incorporating an adjustable cam for the leadscrew half nuts.

The ML7R was launched in 1917 not to be confused with the ML7. This machine is a non-power cross feed Super 7 but supplied less the clutch unit. It was fitted with the Super 7 Headstock, tailstock and bed but utilised the ML7 Saddle, cross slide and top slide.

The machine was designed to utilise the basic Super 7 and rationalise production around a single design. It was eventually to become the Myford Sigma 7 in 1977. All ML7R Lathes were pre-fixed with KR before the serial number.

The ML10 Lathe was launched in 1968 as an inexpensive but very serious machine tool. Its market place was to be just above that occupied by a number of popular small lathes, which were suitable for modelling and model engineering on a very miniature scale. The all important feature which put the ML10 well ahead of its competitors was its capability. If you could physically fit a piece of material between centres, instead of looking at it, you could actually machine it.

The first ML10 lathe left the production line on 14th October 1968, and featured a hardened steel spindle which ran directly in the cast iron bore of the split headstock bearing. The first major change came on 18th January 1978, when the headstock was converted to taper roller bearings from machine No. V137261.

The Diamond 10 was launched on 27th November 1993. This was the first time that Myford had offered a lathe direct to the public. The ML10 and Speed 10 lathes were discontinued. 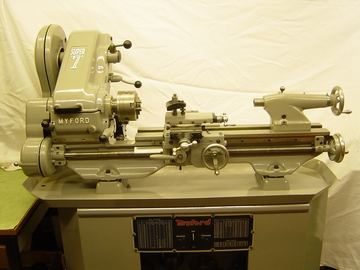